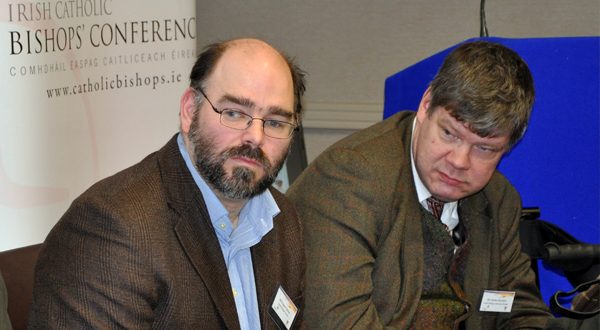 JRS Ireland attended a national conference on migration, entitled ‘Journeying Together: Challenges Facing the Migrant Today’. Hosted in Dublin, Wednesday 19 February, by the Councils for Emigrants and Immigrants of the Irish Catholic Bishops’ Conference, JRS Ireland was joined on the day by other NGOs working in the field of migration, parish workers, Government officials and international experts.

Archbishop Diarmuid Martin opened the conference with a keynote address stressing how migration is an intrinsic part of the DNA of a globalised economy and a globalised world.   This was followed by an insightful presentation on the European perspective by JRS Europe’s Stefan Kessler.  Kessler pressed the need for Europe “to act in the spirit of its founding values: respect for human dignity and human rights, pluralism, non-discrimination, solidarity and equality” and appealed to attendees that “to do so is essential for the creation of an open and inclusive Europe where migrants and refugees are protected.”

A very personal account of forced migration was shared by Ms Cecilia Taylor-Camara, from the Office for Migration Policy of the Catholic Church in England & Wales, before discussions concentrated on the four main themes of the conference: The impact of migration on the families of migrants in the asylum process; Undocumented migrants; Human trafficking and Prisoners in Ireland and abroad.

During the plenary discussions that concluded the conference, Eugene Quinn, JRS Ireland National Director, took the opportunity to focus attention on the length of time that asylums seekers now find themselves trapped in the asylum process in Ireland: “One in 3 asylum seekers have been waiting more than 5 years for a conclusion to their application for protection.  They have committed no crime but endure what many feel is an indefinite sentence.”  Quinn added “Durable solutions for asylum seekers living long term in Direct Provision are urgently needed”.