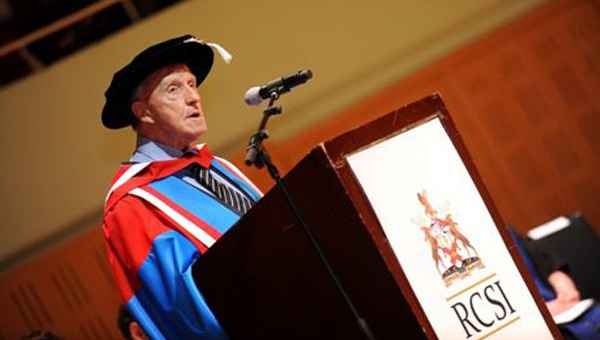 The Royal College of Surgeons of Ireland confers one honorary doctorate each year. In 2011 it honoured President Mary McAleese. This year it invited Michael J.Kelly SJ, to accept the award. He was the last act in the college’s Conferring ceremony in the National Concert Hall.

The citation which introduced the awarding of the doctorate is inspiring and rich in detail. Read it here.

Professor Cathal Kelly, the Registrar/CEO of RCSI, spoke of Michael’s remarkable contribution to education in Zambia, in particular to improving the educational opportunities for Zambian girls, but still more in tackling the AIDS epidemic. His work in this field has been internationally acknowledged as seminal. He has stressed a long-term, preventative approach, especially through education and improving the role of women in Zambian society.

Professor Kelly ended with an Ignatian touch: “Ignatius Loyola implored his followers ‘to go forth and set the world on fire’. Michael Kelly in following this path has demonstrated the power of one, and the power of education to change lives.” Michael was asked to respond to the award, and when he ended, the audience rose spontaneously to give him a standing ovation. Michael is currently in Cherryfield, recovering from a life-threatening operation.

It is undoubtedly the first time that one of the Cherryfield residents sallled forth to receive an honorary doctorate.