Reflections of a news reporter 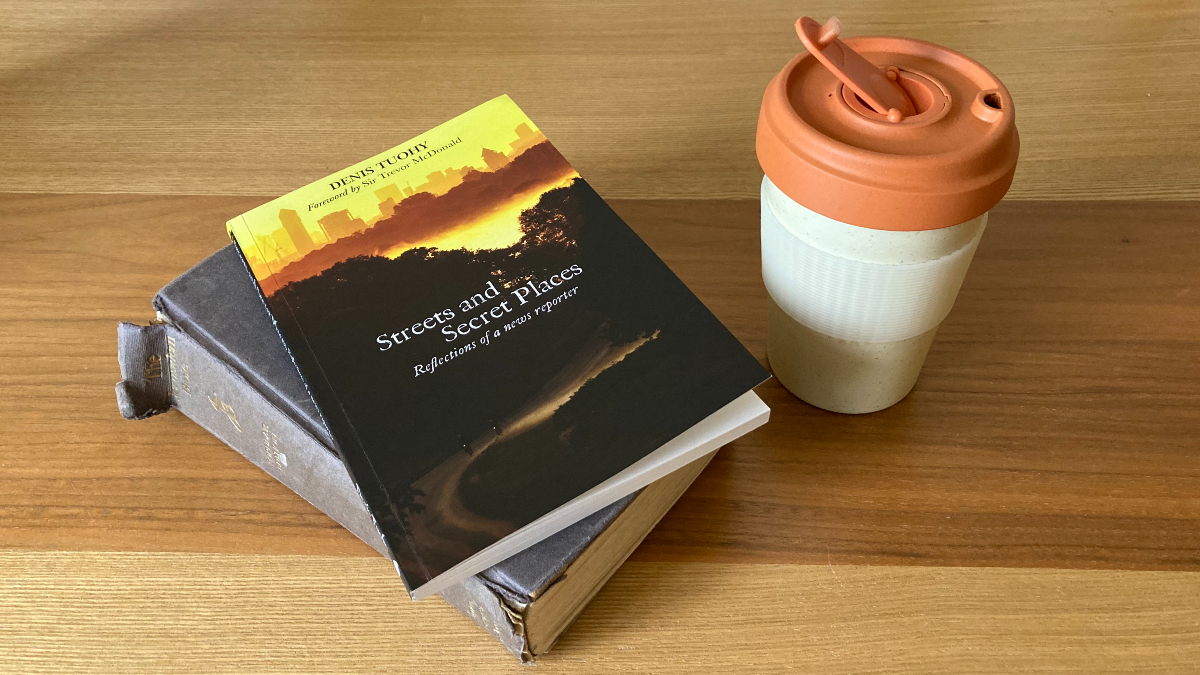 Denis Tuohy, the broadcaster, journalist and actor, has written a new book with Messenger Publications entitled Streets and Secret Places: Reflections of a News Reporter ». It is a collection of his Thought for the Day pieces for BBC Radio Ulster, with linking commentary about his professional and personal life and his meetings with public names and famous faces through the years.

“In this anthology, reflecting on public events and private experience, Denis Tuohy doesn’t preach. He allows the power of observation to speak for itself.”

Some of Tuohy’s recollections include a multi-faith gathering in New York after the killing of Martin Luther King and taking part as an actor in Over the Bridge, Sam Thompson’s play about bigotry in the Belfast shipyard. He recalls encounters with an unexpectedly thoughtful Muhammad Ali and Margaret Thatcher in a reflective private moment.

Referring to a Thought for the Day on the topic of winning, Tuohy says:

“Sport is not all about winning. People do remember losers. A fine England rugby team won the Grand Slam in 1992 by beating France at Twickenham, but the defeated French had scored an astonishing try from a movement that began behind their own line.

“It was a cameo of such scintillating brilliance that one reporter could imagine a young enthusiast in years to come saying to his grandfather, ‘You were there when England won the 1992 Grand Slam. Tell us about the French try'”.

According to journalist and broadcaster Mary Kenny, Tuohy blends a natural gift for story-telling with a deep knowledge and understanding of Christian faith, transmitted in an engagingly accessible way.

He tells a story about when a group of Black and Tan soldiers showed up at his mother’s family home in Dublin when she was twelve years old. While the soldiers were ransacking one of the rooms in the house, Tuohy says: “the officer in charge escorted the frightened children into the living room where he sat down at the piano and played music hall tunes to distract and calm them”.

He continues: “Over the years, when my mother would tell the story, it was never the intrusion she focused on… but the man in a fearsome uniform whose act of sensitivity and compassion had earned her lifelong respect. For her, it was always how individual people behaved that mattered, not labels.”

Read Streets and Secret Places for many more stories and reflections.

Denis Tuohy began his broadcasting career in 1960 as a BBC newscaster/reporter. He produced and presented the award-winning UTV series, The Troubles I’ve Seen and was a presenter and reporter for Panorama, 24 Hours and Tonight (BBC1), TV Eye and This Week (ITV). He has appeared as an actor in Fair City, The Clinic and the feature film Strength and Honour.

The wisdom of feelings

Joy of Easter: A scholarly perspective

Pastoral conversion of the parish

Journeying with Christ this Lent

Shining a light on the sacraments

The treasure of families