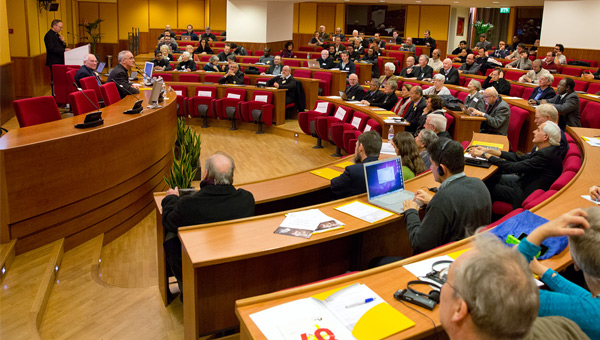 Fr Brendan Staunton interrupted his sabbatical year by attending and reporting on a major seminar in Rome: Revisiting Lonergan’s Anthropology: “I was proud to be an Irish Jesuit at the International Lonergan Conference in the Gregorian on the last four days of November. I heard speakers from Australia, America, Africa, Asia, Jerusalem, Canada, Malta, Mexico, Italy and not least Ireland. Michael Paul Gallagher and Tim Healy did us proud, with informative and inspirational inputs.”

“Three years ago the new French Rector in the Gregorian said to Gerry Whelan that he thought Lonergan still had something important to say, especially for the implementation of Vatican 2, and asked Gerry Whelan to organise this Conference as a prelude to launching a Lonergan Centre in the University to make Lonergan more known. So much work went into the preparation. Tim Healy and Michael Paul were part of the organising group.

The keynote Speech was given by Fred Lawrence from Boston College, now in his early eighties. Nevertheless, an engaging hour and a half evoked and provoked many memories of the Lonergan we heard about in Philosophy. Conn O’ Donovan attended, a real link with those heady times, when as Lawrence put it so well: we were being weaned from an “ahistorical orthodoxy”.
Lonergan saw this, and made it his passion and project to put history into theology. This esoteric-sounding idea actually percolated into my Tertianship, when Herbert Dargan invited John English from Canada to speak to us about our “graced history”. Yes, our personal, existential experiences. (Michael Paul in his paper talked about the “academic evasions of the experiential”; the “split between faith and lived experience”, still prevalent he believes.)

All the other speakers brought out the concrete implications of Lonergan’s thinking, especially Matthew Lamb from Florida, Ave Maria University, who spelt out the latent spirituality in Lonergan’s anthropology. A Trappist background.

Other speakers approached Lonergan at different stages of his life, especially his years teaching in the Gregorian, and the different aspects of human subjectivity he explored. Not to mention his work on The Trinity, that Neil Ormerod from Australia took as his theme.

Lonergan’s intellectual and theological predecessors frequently surfaced, especially Augustine and Aquinas; Hegel and Kierkegaard. (Surprisingly Kant rarely got a look in).  Lonergan’s Method was applied to Inter-faith dialogue; faith and culture issues; belief and faith; cognitional activity, and affectivity; Indian philosophy; Bioethics; social scientists, and especially conversion: intellectual, moral and religious. I was glad when someone included psychic conversion too. I met three people who knew Bernard personally, and their memories of meeting him are full of feeling. One went to his room once for advice on a seemingly intractable philosophic problem in Heidegger. He was warmly welcomed and Lonergan spoke to him about prayer!
The atmosphere was one of convivial friendliness, helped by the modern facilities and smooth running, for which Gerry Whelan received deserving praise. Lectures, Workshop groups and Panel Discussions were all woven together in a way conducive to “theoretical contemplation”.

Some stumblings with the simultaneous translations were soon sorted. Most of the papers were in English however. The contributions from women theologians, albeit a minority, were warmly welcomed. One belonged, Prof. Catherine Clifford, to an edifying ecumenical community in Ottawa.

A highlight for me was when a Professor from Korea suggested that “Lonergan needs to be reinterpreted in the light of Lacan”! I think they are kindred spirits, albeit working in different discourses, covering different fields, but both passionately promoting human subjectivity, genuine authenticity and a love of truth. Just as Aquinas corrected Aristotle, Lonergan corrected Aquinas. Could Lacan correct Lonergan?! Beyond the cogito..? Build a bridge between the inner verbum and the signifier?! Interiority as extension, rather than the inner and outer container model? Our interior life is the time it takes to understand, as Fred Lawrence spelt out. Leo X111 was quoted: “to increase and perfect the old with the new”. Or as Vatican Two’s update of this: the new is hidden in the old; the old is manifested in the new.

Lonergan once loomed large in the Irish Province, but from being the flavour of the month, he was dethroned and fell out of favour, making the work of Bill Mathews, Ray Moloney and Des O’Grady and others more remarkable. But then the same happened to Caravaggio! And Vermeer was only recognised for his genius long after his death. Lonergan most resembles Cezanne, I think: a “painters’ painter”, who took a long-term view.

But Lonergan’s reputation as ”theologians’ theologian” does not do justice to the everydayness of his thinking. There is nothing as practical as a good theory, especially one from a traditional modernist. Sure there is a danger of a “tribal mentality” in following any giant, but this Conference restores Lonergan to a position where all can benefit from his more modern expressions of faith, and his notion that Romanism in not all of Catholicism! I attended Pope Francis’s Mass for the closing of The Year of Faith, where he spoke similarly. The heart of his homily, (nine minutes!), was: Be Christological; and Lonergan was nothing if not Christocentric. If faith “is the fall-out of being in love with God”, this Conference was a faith map for the future of faith. When I will be looking back on my sabbatical, I will see this as a real highlight. I am so grateful for the timing. And is not “readiness all”?

P.S. Talking of timing, Gerry Whelan’s book on Lonergan came out just in time. Progress, Decline and Redemption. Social Concern, linking Lonergan with the orientation of Pope Francis. Salvador Dali’s Christ on the cross from Glasgow.