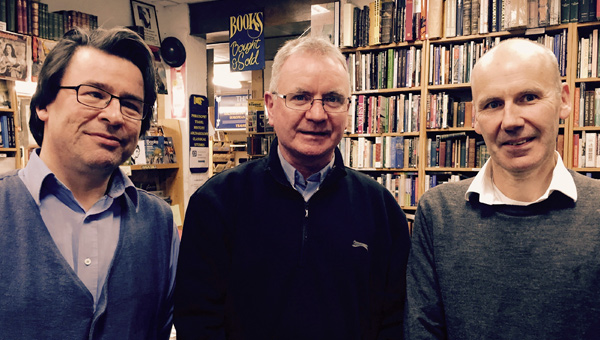 Dr John Connolly, founder secretary of the Irish Association of Suicidology, was guest speaker in the famous old Galway bookshop Charlie Byrnes where the owner Charlie Byrne (pictured on the right) had invited Brendan McManus SJ to sign copies of his book Redemption Road: Greiving on the Camino. Margaret Tierney of Console also spoke, thanking Jesuits for donating the proceeds of the book to the charity.

Despite a pea-souper of a fog, psychiatrist Dr Connolly drove the sixty miles from his home and practice in Pontoon, Co Mayo to address the issue of suicide, and he praisied the contribution made by Brendan McManus SJ in helping those affected by it. He said that Brendan, in describing his own personal process of healing from the deep pain of his brother’s suicide, had set out a template that others could choose to follow.

He stressed that every person is affected by the death of a loved one by suicide in their own unique way and there was never a ‘one size fits all’ solution for the process of grieving and healing that people go through. Even the famous five stages of loss (denial, anger, bargaining, despair, resolution) are never followed sequentially and people go in an out of all or some of the stages many times, he said. Nonetheless it was important to have the shared experience of others who speak about their pain and recovery truthfully as Brendan had done in his book and he said he had no doubt but that it would help those who read it.

Margaret Tierney of Console, the charity which helps families bereaved through suicide, said the publicity that Brendan’s book had given Console was invaluable. Brendan had highlighted in the book the help he received from them as a member and had recommended the organisation to those seeking a safe place to share their grief and be understood. And thanking the Jesuits for donating the proceeds of the book to Console, she outlined some of the projects they were developing with the help of such funding, including a social media venture to alert young people at risk to the fact that there is hope and help available for them.

The Camino – a spiritual shortcut?

The courage to turn inward