For Lent, artist Joan Keogh has written a book of Stations for the Soul. The book features here own paintings and thoughts on Christ’s passion as mediated through her work.  Diocesan priest Alan Hilliard has written his own series of forty reflections for the reader to dip in and out of over the forty days of the Lenten season. Donal, who is also editor of The Sacred Heart Messenger, says that all Messenger books are aimed at people who want to take a bit of time to reflect on the meaning of faith in their everyday lives. “The books are simple but not simplistic,” he says, ” and Dipping into Lent is the ideal book for people who want to mark Lent without feeling burdened by the six-week stretch”. The Sacred Space Lenten Prayer book, 2018, also published by Messenger publications, is always a popular seller. The book draws on material from the online prayer website sacredspace.ie,  which is used by thousands around the world.

The Messenger publishing house has a long tradition of  book publishing, particularly pamphlets written by Jesuits, over the  130 years of The Messenger in Ireland. Johnny Hyde was an iconic Jesuit teacher of theology, and his pamphlet on ‘Prayer’, written many years ago, is still on sale. It is beloved by those who’ve bought it down the years. After Easter Johnny Hyde will feature in a compilation book on the lives of well-known Jesuits, entitled With Christ in Service, part two. The first volume of the book was published last year. According to Donal, “nowadays any book that sells over 1,000 copies is regarded as doing very well.”

Historian Thomas Morrissey SJ has written many books on well-known public figures such as Fr John Sullivan SJ, Archbishops Edward Byrne and Thomas O’Dwyer, Edward Cahill SJ and Thomas Ryan SJ. His latest book, soon to be published by Messenger, is a biography of Daniel Murray, Archbishop of Dublin, who died in 1852, and was succeeded by Archbishop Cullen.

Messenger Publications have, in later years, teamed up with Loyola Press, the Jesuit publishing house in Chicago. A few years ago, Loyola and Messenger published Dear Pope Francis, a book of letters from children around the world, addressed to the Pope. His responses, a catechetical tool, are included in the book which was a New York Times bestseller. Later this year the two publishing houses will publish another book of responses from the Pope, this time to elder figures who are sharing their wisdom with a younger generation.

In this interview Donal also recommends two books by Tom Casey SJ, a lecturer in philosophy in Maynooth. Tom was a friend and admirer of the work of the late Michael Paul Gallagher SJ. So he’s written Wisdom of the Crossroads, a book which explores the context and content of Michael Paul’s work. It’s due out in March, and in May, his book on Mary, entitled The Smile of God, will be on the bookshelves.

Like many outlets at present, Messenger Publications also have a sale. The much-loved photography books of Fr Browne SJ are discounted.  Brendan Comerford’s well received book on St Ignatius and his spirituality, The Pilgrim’s Story is also reduced, and there are special offers on books of Gospel reflections by Donal himself.

For information on the many books from Messenger Publications click here or listen to the full interview with Fr Donal.

Robots, ethics and the future of jobs 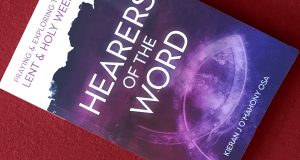 A useful guide through Lent