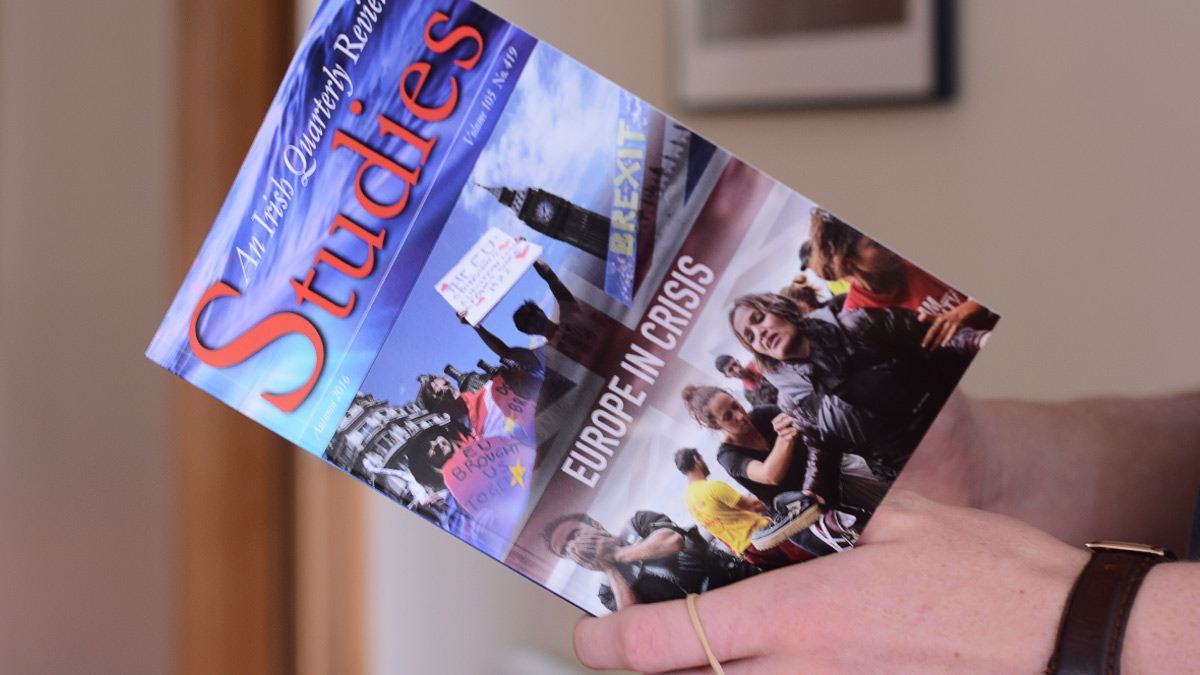 The great contemporary crises of Europe constitute the theme for the autumn issue of Studies. Specifically it addresses the migrant crisis and related issues relating to the presence of Muslims in Europe, as well as the institutional crisis marked by Brexit, the British vote in favour of leaving the EU. With this latter event, according to the editorial, “a continent already struggling to maintain cohesion and commitment to its founding principles was thrown into further uncertainty and a degree of disarray by this unhappy development”.

An article by Italian Jesuit Antonio Spadaro shows that Pope Francis is deeply concerned by the unravelling of the European process or project. Starting with the pope’s reception of the Charlemagne Prize, awarded annually by the city of Aachen to people who have contributed to European values, Spadaro notes Francis’s ‘outside’ quality, his gaze from the borders of Europe in order to discover the health of the continent. The Pope is anxious that Europe is “more concerned with preserving and dominating spaces than with generating processes of inclusion and change”. Europe, the Pope thinks, is becoming more entrenched, more static, concerned most of all to protect its ‘spaces’. This is a source of regret. The vision of the founding fathers of Europe, one that Francis shares, is of a dynamic Europe which can find “alternative and innovative paths in a world scarred by wounds”.

One of the borderlands from which the Pope views Europe is Lampedusa, the small Italian island south of Sicily which has been the main focal point of irregular immigration in the Mediterranean. The migrant crisis presents a challenge to Europe. For Francis it raises the core European idea of integration. To integrate means to make the differences of nationality, of vision, of style “part of the process of construction”. Europe has done this successfully in the past. Now it is called on to do it again.

And the Christian contribution to Europe? Quoting the great Jesuit theologian Erich Przywara, “it is that of Christ in the washing of the feet. In other words, service and the gift of life. It must not become a colonial enterprise”.

The challenge to European values posed by immigration is also a prominent theme in this issue. In the lead article, Eugene Quinn, Director of the Jesuit Refugee Service in Ireland, remarks on the “inequitable and unsustainable” response of Europe. Increasingly the EU’s policies have come to be concerned with stemming the flow, not meeting the needs of the migrants. And Ireland’s contribution has been disappointing: “The political response of the refugee crisis has not reflected the generosity and willingness to help expressed by many individuals and communities.” “Each of us is called to act, Quinn concludes; “This is a shared responsibility.”

The themes of shared responsibility and of urgency in meeting the political and cultural challenges of the Middle East are prominent in a thoughtful report on the situation from the ground floor – written by a group of Jesuits involved in that part of the world who were requested by the Jesuit Superior General, Adolfo Nicolás to initiate an informed conversation, at least among Jesuit communities worldwide.

Other articles of particular note include an incisive commentary on “Christians and Muslims in tomorrow’s Europe”, by Damian Howard SJ, lecturer in Muslim-Christian relations at Heythrop College, London, and a forthright assessment of Brexit, which has ended the “increasingly tedious tragedy of British EU membership”, by  UN Special Representative and former EU Commissioner, Peter Sutherland. Sutherland lays particular emphasis on the impact of Brexit on Ireland.

Studies is published by Messenger Publications. It may be purchased here.

Jesuits back for The Ploughing

Studies: The courage to speak freely