Studies: The pity of war 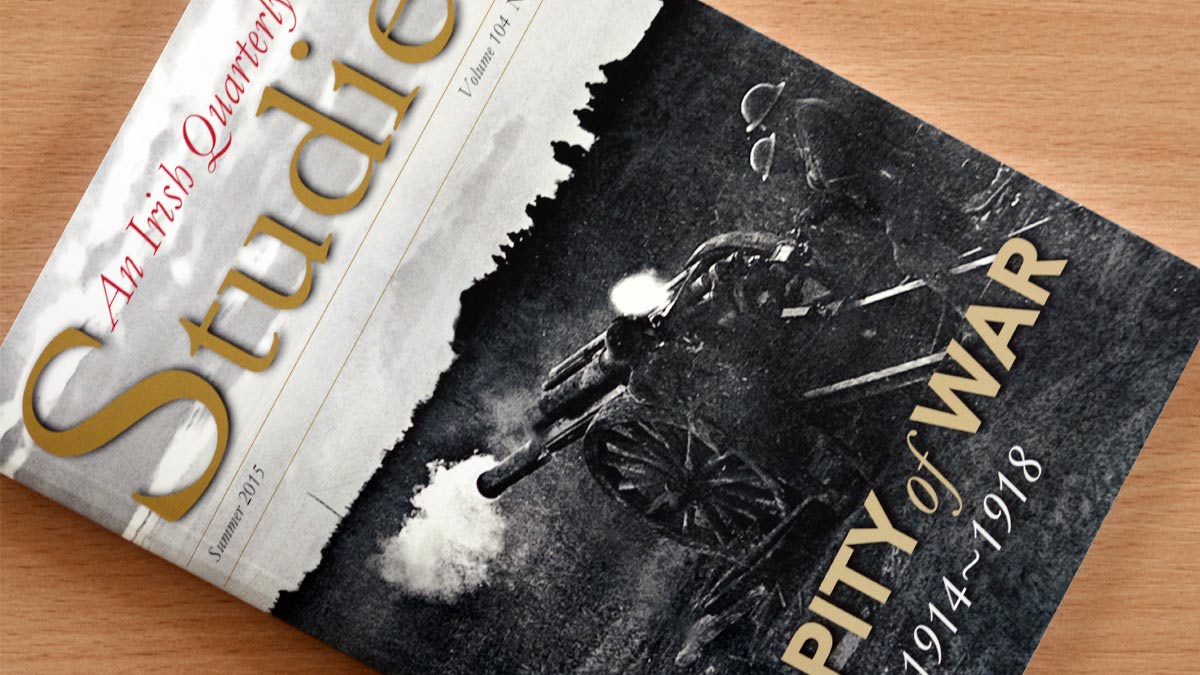 The theme which dominates the summer issue of Studies is the First World War. “We are in a season of momentous commemorations,” begins the editorial by Bruce Bradley SJ, referring to the centenaries of so many appalling encounters in the European theatre of war. Also of “the painful clash of loyalties” experienced in Ireland, both by individuals and by whole communities. The story of Francis Ledwidge’s ‘doubleness’ is told, for example. He was “an unabashed Irish nationalist even while serving with the British army in Gallipoli and then in Serbia”, before eventually losing his life to a shrapnel bomb in Flanders. The case of Tom Kettle is also considered in this volume. He, like Ledwidge, was a nationalist, but he was decidedly convinced, after experiencing the brutality of the Germans who were overrunning Belgium, that the Allied cause was a just one.

There is a sense of ‘doubleness’ too, perhaps, in Patrick Kenny’s story of Fr Willie Doyle, a Jesuit chaplain of extraordinary bravery and self-sacrifice. In the throes of war his duty was to bring peace, peace to the many poor soldiers torn to pieces in the trenches of the Western Front. He received a Military Cross for bravery at the Somme, but he remarked, “I am sorry these rewards are given to chaplains, for surely he would be a poor specimen of the Lord’s Anointed who would do his work for such a thing…” He was not there for the glory.

Another article on the Irish in the Great War is based on archivist Damien Burke’s talk to the Jesuit Bicentennary conference (‘Under the Influence’) in September 2014, and it covers a number of other Irish Jesuit chaplains in the Great War whose tales were not told in the book he edited on this subject (Irish Jesuit Chaplains in the First World War, Messenger Publications, 2014).

The lead article in this issue of Studies, while not about the Irish presence, is also about the first World War. It is a thoughtful piece by Heather Jones on contemporary perceptions of the war in Europe, on whether or not there was a sense in those years that the War was transgressing the bounds of legality and acceptability in war. There is much evidence, she writes, to show that contemporaries, both at home and at the war front themselves, saw the war as a place where norms were being breached. “From the killing out of hand of prisoners of war seeking to surrender, to the use of illegal or improvised weapons, the front was seen as a place where primitive behaviours breached social codes and customs of traditional warfare.” And perhaps the single most egregious form of transgression related to the chronic blurring of distinctions between combatants and civilians. Civilians were directly targeted in shelling episodes and naval bombardments, and when it suited the purposes of realpolitik they were deported, evacuated, or interned. Her conclusion is that the War was not a ‘total war’ in the way that the Second World War was, but that it did indeed unleash “processes of ‘totalisation’ which undermined the combatant-civilian distinction”.

Who frames the news?