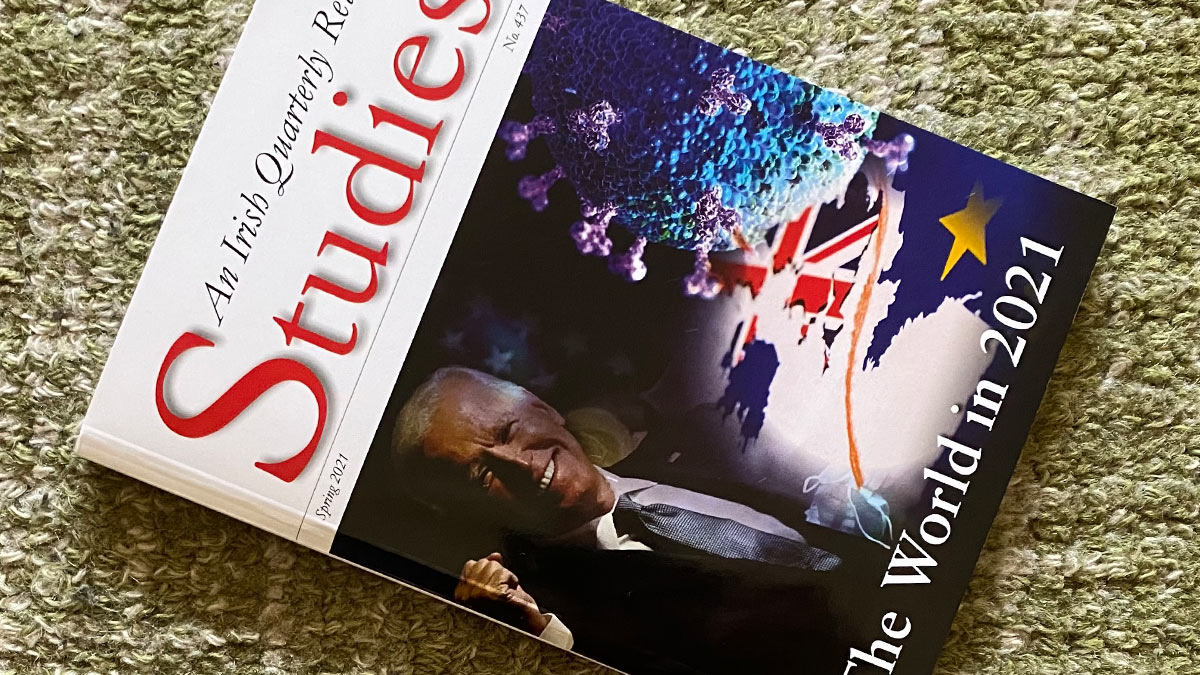 For the entire world, 2020 was a milestone year – traumatic for the most part, but not without signs of hope. It was the year, above all, of the pandemic, but also of the completion of the Brexit process, the sharp rise of extreme-right populism, xenophobia, and wealth inequality, as well as of the toppling of the Trump administration, organised opposition to racism, unprecedented success in developing vaccines, and much more besides.

It seems fitting, in the light of this, that the first issue of Studies for 2021 would have something of a stock-taking feel to it. It is 2021 now. Where does it find us? What lessons have been learned? What can we expect ahead? As editor Bruce Bradley SJ says in his editorial, “We are deeply conscious, some of us perhaps for the first time, of ‘what history feels like while it is being made'”.

In ‘The world in 2021’, Dr Kevin O’Rourke, Professor of Economics at New York University, first strikes a note of optimism – Biden, vaccines, the promise of normality – but warns then that many of the underlying problems that gave rise to the crises of 2020 are still in place. And these problems are considerable. The nationalism, xenophobia and racism of recent times were triggered by very real concerns about a globalisation that was indifferent to growing inequality and financial instability and only cared about keeping markets unfettered. So, as O’Rourke puts it, you had Trump on the one hand, and on the other you had ‘Davos man’, “cheerleader for the globalisation of the twenty-first century”. What is needed now, he argues, is to move beyond this binary choice and attend to the complexity of the issues.

Some matters in particular require attention. Firstly, it is not enough to provide safety nets for workers; their dignity must be protected too. Secondly, international agreements should serve to level up, not down, standards relating to labour and the environment. Thirdly, state intervention will be necessary in order to protect the common good in many ways that the market has neither the will nor the ability to do. And finally, countries must learn from the hard lessons of 2020 that a more radical and determined response to existential threats posed by viruses or climate change is necessary. Countries that tried to balance the health needs of their people with keeping their economies functioning as normally as possible suffered much more – both in terms of lives lost and of damage to the economy – than countries that made addressing the threat of the pandemic their sole priority. The years ahead will make the need for such responses even more apparent. “We need,” O’Rourke remarks, “to make tackling the climate crisis the central goal of the rest of our lives.” We have known intellectually for a long time just how much damage climate change can wreak. Now, thanks to Covid-19 in 2020, we know it emotionally as well.

David Holloway, Professor of International History and Political Science at Stanford, writes about the prospect of a 2021 return to normalcy in the United States. Much damage has been done, he notes, to international respect for American competence as well as to their reputation as standard-bearers of democracy. Yet, even though the Biden administration has reversed some of Trump’s policies, it would be wrong either to expect or indeed even to hope for a return to normalcy. The world has changes in these last four years; so too has the United States. It has lost its soft power and its leadership in the world. This may be good to an extent, but the world would suffer if the US now retreated from democracy or failed to create a more just society.

The Catholic Church has also reached a kind of watershed moment in recent days. Fr Tomáš Halík, Professor of Philosophy and Sociology in Charles University, Prague, looks at the meaning of the pontificate of Pope Francis. Specifically he considers his “revolution of mercy” and his commitment, especially clear in Fratelli tutti, to a human brotherhood. The opposition to the Pope’s Catholic vision within the Church, however, has been astounding. Fr Halík remarks:

I must admit that, even in these days, when the coronavirus is killing many people in my country, I personally cannot stop worrying about yet another pandemic, namely the pandemic of fundamentalism and bigotry. Looking at the Catholic supporters of Donald Trump, I struggle with the intense temptation of scepticism: Is ‘ecumenical dialogue within the Catholic church even possible? I find interreligious dialogue, and especially dialogue with educated and thoughtful people outside the church, so much easier than any communication with the people who combine religion with populist efforts.

Later he adds: “Yes, we recite the same Lord’s Prayer and Creed together with these people. I do not deny that there are good and honest people among them. However, I fear that we live in unbridgeable parallel universes.” The only way forward that Fr Halík can see is to take our cue from Pope Francis’s attitude to creation and to humanity, especially to people on the margins, and cultivate a culture of spiritual discernment that will both take us to the heart of the gospel and inform a creative response to the signs of the times.

Other articles in the current issue of Studies include Australian Jesuit Frank Brennan SJ on the Cardinal Pell case (though a critic of Pell’s theology and ‘culture wars’ attitude, he thinks the Cardinal has been very badly treated by the Australian courts), Professor Bryan Fanning on the Christian democratic roots of the European Union, and the first instalment of a brilliant close reading of Micheal O’Siadhail’s The Five Quintets by theologian David F Ford, Professor Emeritus of Divinity at Cambridge. The title of Dr Ford’s essay sounds the note of the whole issue: ‘Seeking a wiser worldview in the Twenty-first Century’.