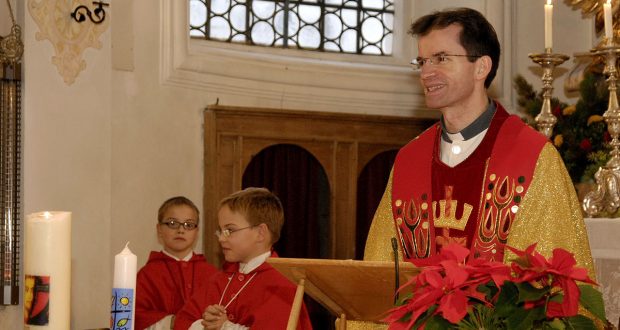 The global economy is going bust and I’m at peace

Tom Casey SJ gives the context for a series of talks he is delivering in Harold’s Cross Parish on “The Practice of Christian Living”.

If there is a world economic meltdown, and you lose your job and your life’s savings, how can you dream of having inner peace?

This is one of the big questions I’m trying to answer in an 8-week course I have just started giving in Harold’s Cross Parish this past Monday evening.

Even though the course was not well-advertised and despite the fact that Monday was a rainy evening, 20 people turned up for the first session: there is obviously a deep spiritual hunger in our city. After the 30 minute-talk there were questions and comments for 15 minutes. We rounded off things with 30 minutes of quiet prayer together, punctuated by meditative hymns and the occasional prayer spoken aloud.

I began by sharing stories of people who today are getting swept away by the beauty of God after years of being buffeted this way and that by “de-souling” forces. They are rediscovering the mystery that has in fact always been quietly drawing them.

The mystery of God is in a sense so obvious that it eludes our gaze, as happened with the monk who spent long years of fruitless searching before eventually arriving at a deep and loving union with God. One day he spoke about his torturous journey home with a friend.

“I felt like a fool”, the holy man said.

“Why?” asked his friend.

“Because,” the saint replied, “I was like someone putting enormous effort into entering the house by climbing a ladder and smashing the window, when in fact the front door had been open the whole time.”

The ancient Greek philosopher Aristotle explained why we fail to see God: “The difficulty lies within us. Our eyes resemble those of the owl. Just as the eyes of the owl are blinded by the brightness of daylight, so the intelligence of our soul is blind to what is clearest of all.” (Metaphysics).

Although the journey into ourselves and to God can often take a long time, in many ways it is a journey that has no distance, because we move from where we are now to where we have in fact always been. We have been standing in front of something amazing all our lives, but we have never really noticed it.

Sometimes it takes a person from outside to help us see with fresh eyes. While I was teaching for 10 years in Rome at the Gregorian University, our community lived in rooms occupying the two floors immediately above the university itself. There was a fascinating person who stayed for a few months in our community toward the end of World War II.

His name was Israel Zolli, and from 1939 until 1944 he served as the Chief Rabbi of the Jewish community in Rome, the spiritual leader of Italian Jews. So how did he come to stay for several months in a community of Jesuit priests in Rome?

It was because he encountered Jesus, and because of that, to the astonishment (and consternation) of the Jewish community in Rome and throughout the world, he became Catholic.

It happened in 1944 on the day of Yom Kippur, the holiest day of the year for the Jewish people: a day of fasting, repentance and atonement. This year the holiest Jewish day will be celebrated on Wednesday, September 23. (Pope Francis will be in the USA then, and who knows what will happen this Yom Kippur!)

Rabbi Israel Zolli was leading the synagogue service for Yom Kippur when he had a vision of Jesus wearing a white mantle, and beyond Jesus a great stretch of blue sky. It filled him with an extraordinary sense of peace. And in his heart he heard the words, “You are here for the last time”. He didn’t say anything to anyone about this vision, but that very night his wife Emma told him that during the synagogue service she had seen a figure that looked like Jesus with his hands on Zolli’s head as though Jesus were blessing him. At the very moment his wife was telling him this, their younger daughter Miriam called him. He went to her room and she said, “You know, Dad, tonight I was dreaming that I saw a very tall, white Jesus, but I don’t know what came next.”

Israel Zolli started to prepare himself for baptism. He wasn’t doing this to escape persecution, because by this stage, the German Army had already withdrawn from Rome, and the Allies were occupying the city. With the Allies in control, the Jewish community of Rome was finally safe. And so on 13th February 1945, Israel Zolli was baptized.

There was a lot of anger in the Jewish community when the news of his baptism got out, so he had to move out of the Jewish quarter of town, and so for several months he was hosted in the Gregorian University, where many years later I lived.

Every morning during his stay in the Jesuit community at the Gregorian University, Israel Zolli used to attend Mass, and he liked to spend a long time in prayer afterwards. One day a priest asked him why he wasn’t going to breakfast, and he said, “Father, I am so happy here in the chapel with the Lord, that I never want to leave it.”

And for the rest of his life this former Chief Rabbi of Rome used say: “You who have been born in the Catholic faith, you’ve no idea of the privilege you have of having received from infancy the faith and the grace of Christ; but people like me who have arrived at the threshold of faith after a long journey of years and years, we really appreciate the gift of faith and feel the all the joy of being Christian.”

Israel Zolli died in 1956. A week beforehand he told the sister who was taking care of him in his final illness, “I’ll die on the first Friday of the month, at 3 o’clock, just like Our Lord.” And that’s what happened: on Friday, the 2nd of March 1956 at 3 o’clock in the afternoon, at the age of 75, Israel Zolli breathed his last.

The listeners on Monday night were engrossed by the story of Israel Zolli. It is poignant and powerful. And during the question and answer session after my talk, one of the participants shared in a heart-rending way about how he himself has rediscovered joy and peace after a long dark night of the soul, a seemingly endless period of living in the awful suspension of Good Friday, and wondering whether the darkness of that day would ever give way to the dawn of Easter Sunday and of new life. What he said was a message of hope for the rest of us: no darkness continues forever; whatever may befall us, we can be certain that the light will finally triumph. Each year since this man has made a pilgrimage to Lourdes in thanksgiving.

After the talk and the Q & A, we spent 30 minutes praying and singing God’s praises. During that half-hour, the Spirit moved me to speak about Saint Thérèse of Lisieux, whose statue is to be found in most churches I’ve visited up and down the country. Her gift to our time is her absolutely unshakeable trust in God. As she writes in one of her letters: “my path is complete trust and complete love”. No matter what happened, she clung on to her childlike trust, just like Mary did at the foot of the Cross, during those darkest hours of all. So whatever unfolds in our world, whether it’s a global economic meltdown or personal crises or both, we need to imitate the Virgin Mary and Thérèse: a resolute “no” to anguish, an unconditional “yes” to trust. As Thérèse said just a few days before her own death: “Even if Jesus were to kill me, I’d still love him.” Instead of being gripped by the panic of fear and anxiety, we need to cultivate the complete and disarming confidence that these two serenest of women exuded.

When? Monday nights at 8pm, from 14 September until early November