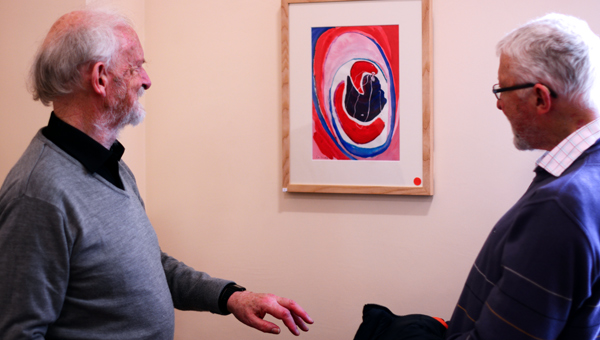 ‘A Life Re-Lived’ was the title of an exhibition of previously unseen paintings by Jesuit Colm Lavelle, held in the Arrupe Room, Milltown Pk and marking sixty years of his life as an artist. Jesuit companions, friends and family gathered on Wednesday 4 June. They were welcomed by Irish Jesuit Provincial Tom Layden SJ who noted that Colm’s vocation was part of a long and honourable tradition of Jesuit artistic endeavour.

He cited Giovanni Battista Fiammeri, who oversaw some of the large decorative paintings of the Jesu, the mother Church of the Jesuits in Rome and Giuseppe Castiglione, the Italian Jesuit lay brother and missionary in China who became a painter in the court of the Emperor. “And Andrea Pozzo SJ, the Baroque painter who developed the use of perspective for the sake of illusion. His most famous painting in the ceiling of the Church of St Ignatius in Rome (The Drawing up of St Ignatius into Heaven) is a wonderful 3D experience and you don’t need the glasses!”

He said he was delighted to mark 60 years of artistic work in which Colm strove”to remain faithful to the Spirit whispering a truth to him about beginnings, birth and life, origin and fulfilment, journey and pain”. He said Colm’s work had gone through various phases over his life time as he “tried to honour that truth through paint, colour and a variety of materials”.

He acknowledged that  for some people, Colm’s work was not always easily understood or readily assimilated. “But he remained true to the call of artistic integrity. Successful exhibitions in Europe and Germany in particular or quizzical looks of incomprehension  from those who ‘didn’t always get it’  never really influenced his fidelity to express as best he could what was being processed from within.”

Referring to the spiritual underpinning of his vision the Provincial said, “The experience of conception and coming to birth, Colm sees as an unconscious reminiscence of the universal experience of origin. So whilst these paintings are intensely personal they also seek to speak to all of us as individuals with a common humanity and express the human story. And an central element of that story is the Spirit, God the Creator, who breathes life into being and whose love is expressed in the willing into birth of every single person, bestowing dignity on them from their very beginning.  In that sense we see a truly Ignatian strain in all of his works, as Colm finds the creator God in all things, the Source, and energising force that brings all things to birth.”

Colm Lavelle also spoke on the night, sharing his own insights into his work and outlining the importance of the different phases he went though and the materials that suggested themselves to him including sand, old barrels, and even horse hair from the mattresses in Clongowes Wood College where he taught art.

After the speeches many visitors stayed around for quite sometime to look at or buy his paintings, some of which still remain and can be viewed or bought by appointment through Jesuit Communications in the Irish Jesuit Provincialate where the contact is Ms Pat Coyle.

Devotion to the Sacred Heart and the Irish experience

The EU, Lisbon, and ineffective leadership