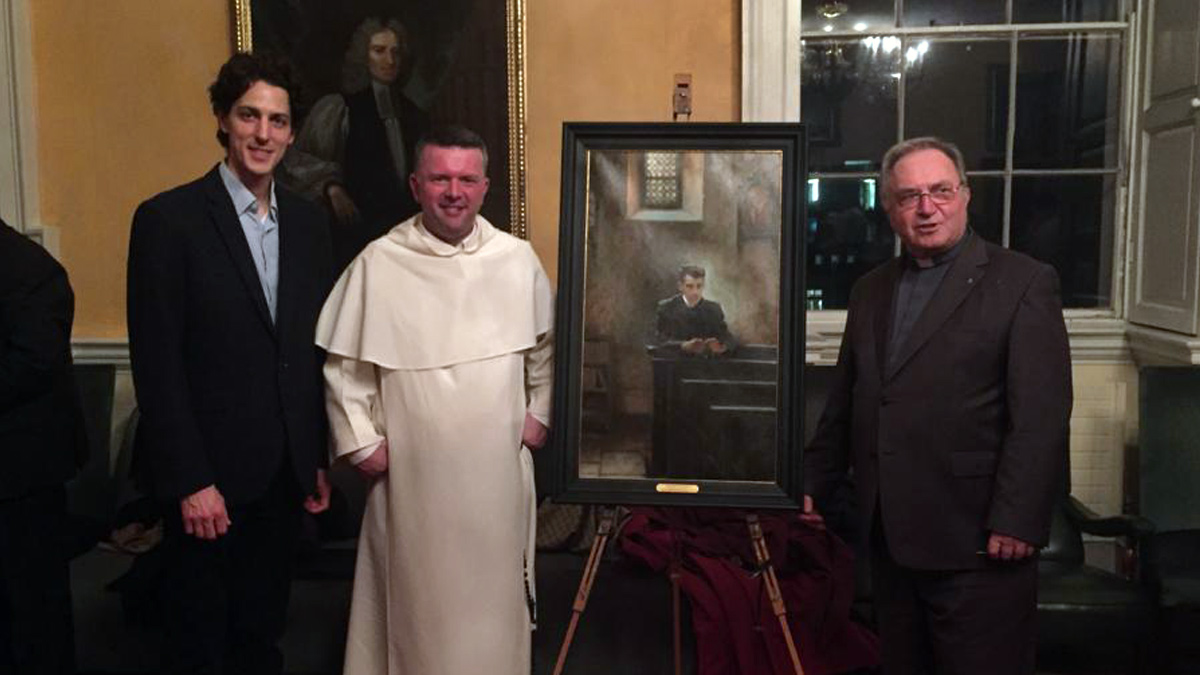 A new portrait of Blessed John Sullivan SJ was unveiled in the Robert Emmet Theater TCD, on Wednesday 27 March 2019, 7 pm. The painting was commissioned by the college. It is the first time a Trinity graduate has been honoured in this way. The painting by artist William Nathans (pictured here on left) depicts Fr John praying the rosary, a prayer to which he had great devotion. It will be hung in the Oratory.

Fr Conor Harper SJ, vice-postulator for the canonisation cause of Blessed John, was the guest speaker. He thanked Trinity Chaplains Fr. Peter Sexton SJ and Fr. Alan O’Sullivan OP for initiating this honour for Fr John, and the Provost of Trinity, Patrick Prendergast, for endorsing it. “Among the many achievements across the history of centuries,” said Conor, “Trinity can now add a special distinction and can now honour one of its past graduates who, it has been acknowledged, achieved a distinction in holiness!”

Conor also gave a brief outline of the life of Fr Sullivan (read full address below). He told those present that John Sullivan, son of the then Lord Chancellor of Ireland Sir Edward and Lady Sullivan, a past pupil of Portora Royal School, Enniskillen, grew up in the Church of Ireland and was a graduate and gold medallist in Classics in Trinity College (1879-1885). While studying Law in London subsequently he became Roman Catholic and later joined the Jesuits. In his ministry after ordination, he became known and revered for his care of the sick and poor for many years in the environs of Clongowes Wood in Clane, Co. Kildare, and died on 19th February 1933.

He was beatified in Gardiner St Church in Dublin in May 2017. In an unprecedented ecumenical gesture, the formal request for beatification to the representative of Pope Francis at the ceremony was made together by the Catholic Archbishop of Dublin, Diarmuid Martin, and the Church of Ireland Archbishop of Dublin, Michael Jackson, reflecting the fact that Fr John was Anglican for the first half of his life and Roman Catholic for the second.

Conor also focused on the ecumenical dimension of Fr John’s life, noting that a remarkable feature in recent years has been the most welcome and enthusiastic support of the Church of Ireland (Anglican tradition) in the various ceremonies honouring this extraordinary Jesuit.

“One of Fr John’s great admirers was the late Archbishop of Dublin, Dr. George Otto Simms,” Conor noted. He added: “When asked why he showed such warm enthusiasm for the notion that John Sullivan should be honoured by the Church of Rome, he responded that we must never forget that John was a member of the Church of Ireland into mature adulthood. By then his character would have been well-formed. So, his holiness he would have learnt in the Anglican tradition and the Roman Catholic Church reaped the fruits of that solid foundation!”

Concluding the evening, Fr Peter and Fr Alan invited all present to a reception after the unveiling, in the Senior Common Room.

The journey of life is full of surprises – and the experience of John Sullivan was no exception. He was born in Dublin in Eccles Street on 8th May 1861 and allowing for his family background the beginnings of life foreboded future comfort and security. His father, Edward, was an accomplished barrister and was already showing the signs of what was to be a brilliant and successful legal career. In 1883 he would become Lord Chancellor of Ireland. His mother, Elizabeth Bailey, came from a prominent family in Passage West in Co. Cork. The Baileys were Catholic and the Sullivans Protestant. John was raised in the religious tradition of his father.

From his earliest years, John enjoyed the great benefits of a home which radiated warm affection, high culture and sound scholarship. In 1873 John and his brother, William, were sent to Portora Royal School, Enniskillen following in the footsteps of his older brothers Edward and Robert. The Headmaster of Portora at this time was one of the outstanding educationalists of the day, Dr William Steele.

The school and its beautiful Lough Erne surroundings made a deep impression on him. Devenish Island, with its ruined Round Tower, steeped in early Irish history of the monastic period, must have stirred him deeply – as it did many generations of Portorans. Maybe it was here that John experienced some of the first movements of spiritual awakening.

John admits that he first went to Portora “bathed in tears” but when the time came for him to leave, he wept “more plentiful tears”. He remembered his alma mater with great affection – and Portora remembers him. Today his name is inscribed for all to see on the Royal Scholars Honours board in the school.

After Portora, John went to Trinity College Dublin. Here he again distinguished himself in his studies and in 1883 he was awarded the Gold Medal in Classics (which is now carefully preserved in the Museum in Clongowes Wood College, Co. Kildare where Father John spent most of his life as a Jesuit priest).

On Wednesday 27 March this year, Trinity honoured their former alumnus in a very special way. A portrait by the artist, William Nathans, was unveiled and will hang in the College Chapel Oratory for all to see. Fr. Peter Sexton SJ and Fr. Andrew O’Sullivan OP are to be warmly thanked for their initiative in commemorating this first graduate of Trinity College to be beatified.

During his lifetime, and even more so after his death in 1933, there was a deep conviction of the genuine holiness of this good priest. His grave in Clongowes became a place of pilgrimage and there was a constant demand for keepsakes and pieces of his clothing which were treasured as relics.

In 1947 it was decided to propose Father John as a candidate for canonisation. As a result of the initial inquiry the first steps in the process were completed and he was declared Servant of God in 1960. His mortal remains were removed from the Jesuit Community Cemetery at Clongowes and brought to a special tomb in the Sacred Heart Chapel in St. Francis Xavier’s Church, Gardiner Street, Dublin.

One of his great admirers was the late Archbishop of Dublin, Dr.George Otto Simms. When asked why he showed such warm enthusiasm for the notion that John Sullivan should be honoured by the Church of Rome, he responded that we must never forget that John was a member of the Church of Ireland into mature adulthood. By then his character would have been well-formed. So, his holiness he would have learnt in the Anglican tradition and the Roman Catholic Church reaped the fruits of that solid foundation!

There have been many memorial Services according to the Anglican rite in recent years. Among the eminent figures from the Church of Ireland who have preached at these ceremonies, we note Archbishop Michael Jackson who has always been a stalwart and constant supporter of the Cause. At the Beatification Ceremony in Gardiner Street on 13 May 2017, Archbishop Michael joined with Archbishop Diarmuid Martin in presenting the Solemn Petition for Beatification in the name of the two traditions that were so special to Father John.

We also remember in particular Archbishop Walton Empey, Archbishop Donald Caird, Canon Adrian Empey, Dean Maurice Carey … all of whom have preached at these gatherings.

The nearest living relatives (members of the Lloyd family, direct descendants of John’s brother, Sir William Sullivan) are strong supporters of the Cause and regularly attend the different ceremonies of commemoration.

It is very fitting that Blessed John Sullivan SJ should be especially remembered in Trinity College. His contribution to the noble tradition of this great college is unique. Among the many achievements across the history of centuries Trinity can now add a special distinction and can now honour one of its past graduates who has been acknowledged of achieving a distinction in … holiness!