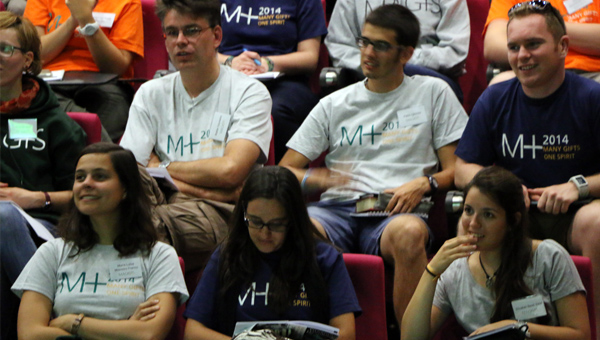 The Jesuits brought 65 young people from around the world to Ireland (7-16 August), where they enriched their faith, and worked in justice projects, divided into four groups. The event is known as the ‘Magis’ (meaning ‘more’) project. It is part of the Jesuit outreach to young adults here and around the world. It takes place every two years on a large scale as a preparation for World Youth Day. However, smaller regional Magis events are becoming more commonplace.

The theme of Magis 2014 Ireland is ‘Many Gifts, One Spirit.’ Magis 2016 will be held in Poland. In Dublin’s Gonzaga College the focus for the first three days was on faith formation, with Jesuits, Ignatian Sisters (a special mention must go to the irrepressible Handmaids of the Sacred Heart) and lay collaborators from the four provinces (Britain, Flanders, Netherlands and Ireland), reflecting on the questions of who we are and how we are to live as Catholics. On Saturday 9th August the pilgrims broke into different groups and began Experiences on the themes of pilgrimage, social justice, creative Christian community, and ecology. On Saturday 16th and Sunday 17th August there was a final celebration and farewell at Gonzaga College. In Galway young adults painted a shelter for the homeless. In Kilmacanogue, Co. Wicklow a group worked on an ecology project (watch them here). A third group pent a week living a monastic rhythm of life in Clonmacnoise. The remaining two groups set off on foot and on pilgrimage in Mayo (interview with Brendan McManus SJ) and in Wicklow, trekking the Wicklow Way to Glendalough.

Two young Jesuits, Ireland’s Niall Leahy and Belgium’s Samuel Overloop, coordinated the events. Niall reported: ‘We had a great week studying the gospel and getting talks on what it means really to be a Christian at a time when many people are unsure about faith and the Church. In our groups the young people were in different places in terms of where they stand faithwise but the programme is designed to show that belief is not just about the head, but also about the heart and the hands. And it’s about doing it with others. The pilgrims were working and praying together and even in a week, created a strong and authentic faith-based community.”

Niall was confident the project would be a success, and he was more than satisfied. Everyone left feeling they had quite a special and intimate experience with the other members of the group. Four Jesuit provinces had worked together in a way that led to deep friendships. One indicator was at the final presentation session, which evoked a healthy sense of competition; everyone claimed their group had the best experience. After watching the presentations, Fr James Hanvey SJ shared his thoughts in an interview with Pat Coyle.

Two features in particular surpassed Niall’s expectations and hopes: first, the impact of Ireland in its different locations and landscapes – they were special: Clonmacnoise, Croagh Patrick, Glendalough, Galway city, the Wicklow Way. The participants were enlivened by Ireland as a place. As one girl put it, “We encountered God in the beauty of the scenery and the challenge of the weather and the walking”.

Secondly, the media work of the two journalists and film-makers was a huge success. They had volunteered for training, and as well as blogging, tweeting (#MAGIS2014), photographing and Facebook, they filmed the ventures on their phones. They did brilliantly, much appreciated by the participants. This is part of a unique experiment under the guidance of Professor Graham Roberts, of the media department in Leeds Trinity University. He’s on the Magis 2014 team and has developed special software to allow the filmed material be edited and tagged by the participants. Collectively, they will produce an interactive film of the whole Magis 2014 experience. To view or use photos of the Magis 2014 experience, go to the Flickr albums.

Bethany Reaches Out To Moyross

‘To give and not count the cost’