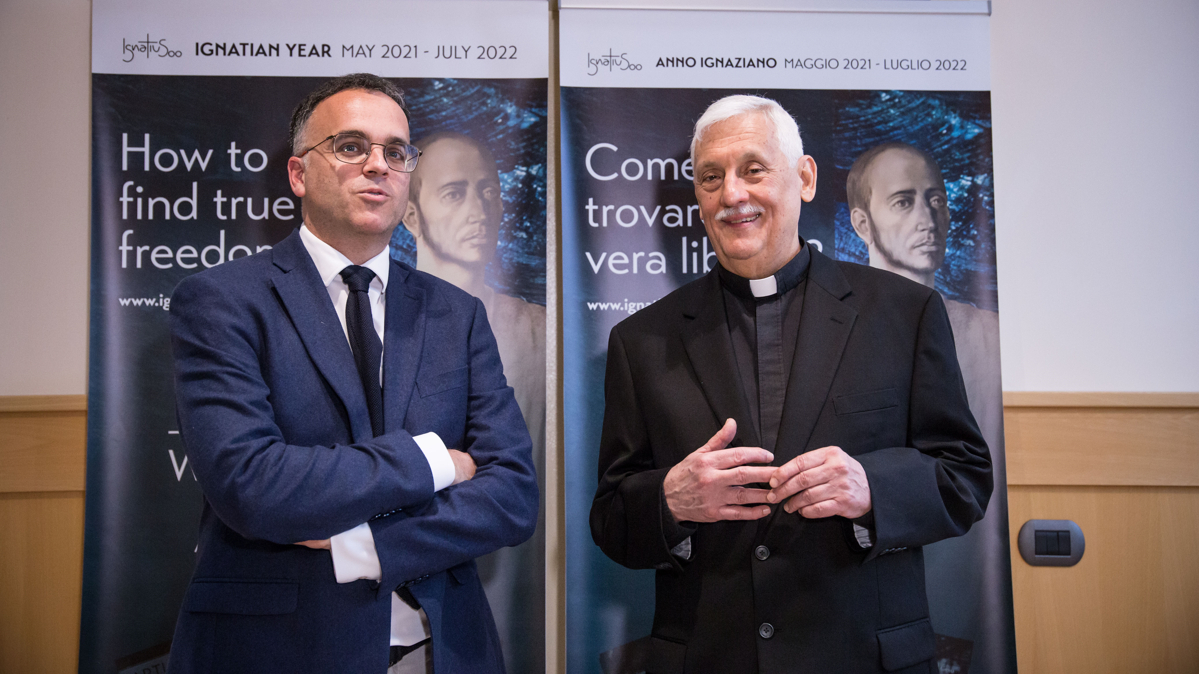 A new book, Walking with Ignatius, was launched at a webinar in Rome on 11 May 2021 as part of the celebrations to mark the 500th anniversary of Saint Ignatius of Loyola’s conversion. The book engages in a spiritual conversation between the Jesuit’s first Latin American Father General, Arturo Sosa, and journalist, Darío Menor. It covers topics such as the life of Ignatius, the life story of Sosa, the challenge of the unsettling twenty-first century, and the future of the Church. Messenger Publications, the publishing organisation of the Jesuits in Ireland, were delighted to be one of the English language publishers of the book.

At the book launch in Rome, Fr Sosa gave a presentation and reflection on how to achieve true freedom which is a key theme addressed in the book. He said:

“The wound received by Ignatius of Loyola in the battle of Pamplona, five hundred years ago, was a crucial moment in his path of liberation. With his leg shattered, he became a pilgrim, a wayfarer towards true freedom. He freed himself from the illusions he had built up from his family experience and in the royal court, to pursue the ideal built from the personal encounter with Jesus of Nazareth, which allowed him to discover the essence of freedom: the love that leads to the surrender of one’s own life so that others may have life.”

“In the book we offer some of the ingredients of the path of liberation that, as Society of Jesus, we are traveling. I say ‘we offer’ because it has been the fruit of a long and wide-ranging conversation in the form of an interview with Darío Menor, completed with points of reflection by Sister Jolanta Kafka in the prologue and Cristian Peralta SJ, after each chapter. Enriched with illustrations by various Jesuit artists, chosen by Pierre Belanger SJ. Not forgetting the editorial coordination work of John Dardis SJ, Jesús Zaglul SJ and José María Bernal SJ.”

In the video below, young Jesuits from around the world reflect on the book’s theme in the context of their lives and Jesuit mission.

Cecilia West, Director of Messenger Publications, comments on the news of securing English language rights for the book. She says:

“We just had another interesting collaboration. John Dardis SJ contacted us some months ago regarding Walking with Ignatius. The book was in Spanish and needed to be translated and published in English. We only had about two months for the whole job.

We got together with Loyola Press [the Jesuit publishing house based in Chicago], found a translator, got the book translated and worked with both Loyola and the originating publisher, Grupo de Comunicacion Loyola, in Spain. We also gave our translation to Gujarat Sahitya Prakash, the Indian Jesuit publisher.

It was great fun working with such a wide group. The books were printed and were ready in our warehouse for the launch in Rome on 11 May. The big excitement for Messenger was to be entrusted with world English language rights, outside North America and South-East Asia.”

Fr Sosa’s observations in the book seek to do more than commemorate a particular date in history. His conversation with Darío Menor is deeply centred on the needs of the world, shaped by the Jesuits’ worldwide apostolic preferences. At the book launch, he said:

“We walk with so many other people collaborating in a mission of reconciliation and justice. We walk with the discarded of the world, accompanied by young people, sensitive to the deterioration of the environment and encouraging better care for the Common Home. We walk and show the way to God through discernment and the Spiritual Exercises that we inherited from Ignatius of Loyola.”

Walking with Ignatius aims to point to the experience of St Ignatius as an inspiration for the deep conversion process vital for any individual, group or institution who longs to make the joyful news of the Gospel present in our time.

Recently, Fr Leonard Moloney, Irish Jesuit Provincial, decided to present a copy of the book to all the lay workers and teachers in the Province. It is hoped that it will help support them in their work during the Ignatian Year from 20 May 2021 until 31 July 2022.

Walking with Ignatius is published by Messenger Publications and is priced at €19.95.

Belvedere winning team ‘on the money’

The wisdom of feelings

A new dream for the Church