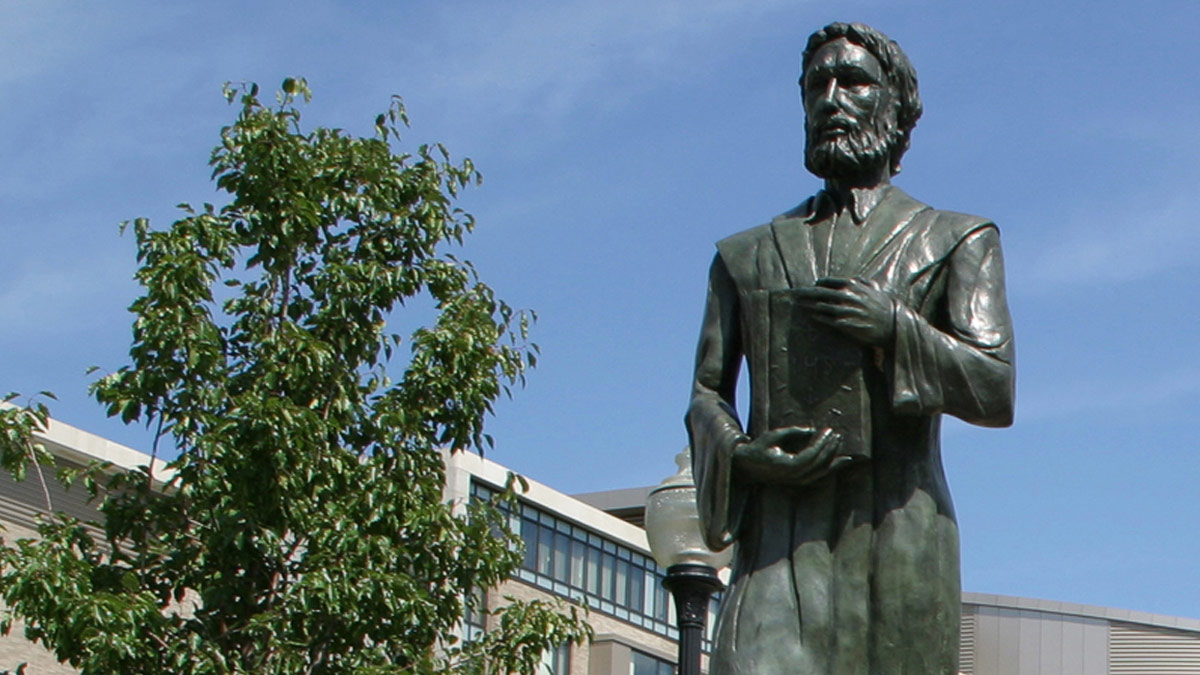 Hailed as the Second Apostle of Germany, Saint Peter Canisius dedicated his life to the revitalisation of the Catholic Church across Central Europe after the ruptures of the Reformation.

Born in Nijmegen, in what is today the Netherlands, in 1521, Peter Canisius was the son of a wealthy burgermeister, or chief magistrate. At the age of fifteen he was sent to Cologne University, from where he graduated as Master of Arts four years later. He then began to study theology, and in 1543 he did the Spiritual Exercises under the direction of St Peter Faber. He then joined the Jesuits – only three years after it was founded.

Germany at this time was rife with religious uncertainty, as Lutheranism grew ever more popular. Canisius saw the necessity of solidifying the Catholic presence there and developing a catechetical response to Lutheranism. He was not given to polemics or politics in this. “An honest explanation of the faith,” he wrote, “would be much more effective than a polemical attack against reformers.”

Canisius established the first German house of the Jesuits in Cologne with great difficulty, while teaching in the university and preaching across the city. He was ordained in 1546, and the following year he attended and spoke at the Council of Trent, an ecumenical council which proved vital in reshaping the Catholic Church in the wake of the Reformation. Following this he was called to Rome where, after meeting with Ignatius of Loyola, he was sent to Sicily to teach rhetoric at a newly opened Jesuit school in Messina.

Never staying in the same place for too long, in 1549 Canisius travelled to Ingolstadt where he taught at the university, then in 1552 on to Vienna. He was offered the post of Bishop of Vienna in 1554 but refused, as it would constrain his peripatetic lifestyle. Canisius was asked to write a catechism for general consumption to compete with Martin Luther’s popular works, and so in 1555 the Summary of Christian Doctrine was published. This work proved immensely popular and important in the revival of Catholicism. In Canisius’ own lifetime it was reprinted over two hundred times and translated into at least twelve different languages.

In 1556 Canisius was named Provincial for Austria, Bavaria and Bohemia. As such he set to work establishing schools for boys and seminaries. In 1559 his presence was requested at the Diet of Augsburg. He was then made a preacher at the cathedral there, and he attracted large crowds with his sermons. That same year he opened a college in Munich, the first of a number of Jesuit schools he established across his province, in cities such as Innsbruck, Dillingen, Würzburg and Vienna.

In 1580 Canisius was sent to Fribourg in Switzerland, where he established a Jesuit preparatory school. He remained in Fribourg, where he wrote and preached. In 1591 he suffered a debilitating stroke and was left partially paralysed. He continued to write however, until his death six years later, at the age of seventy six. Peter Canisius was beatified in 1864, and in 1925 he was canonised and declared a Doctor of the Church.

Ireland and the Jesuits

Jesuits and the Baroque