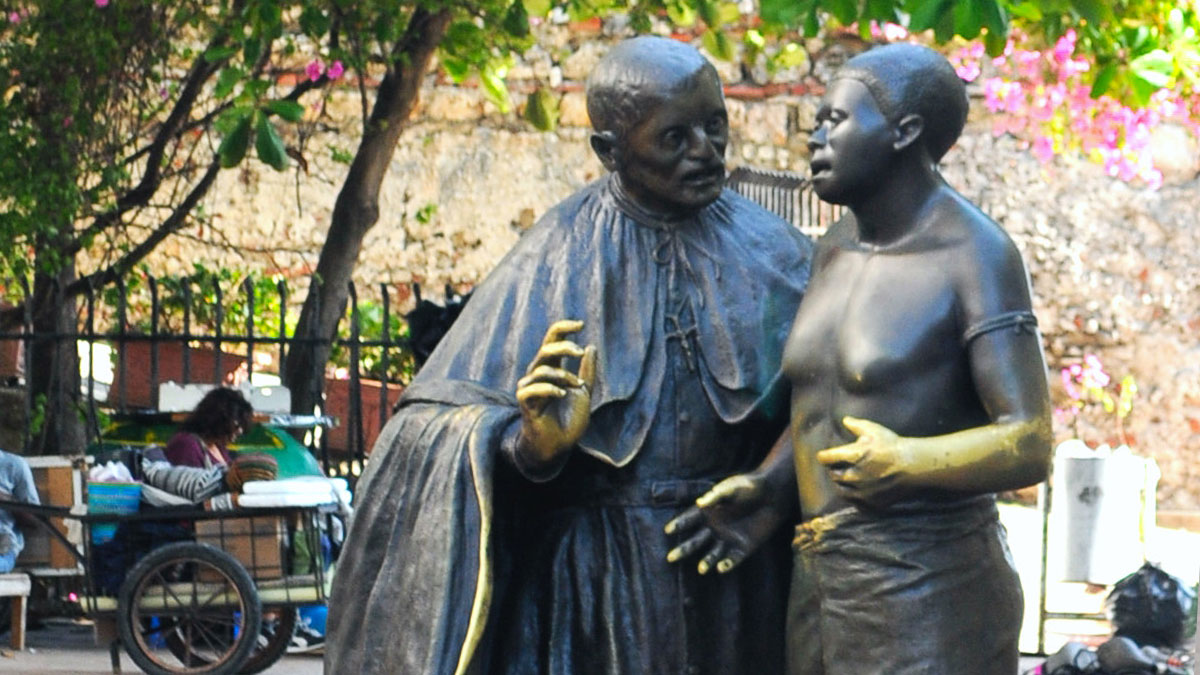 One of the blackest marks upon the many colonies established by European countries was, of course, the establishment of a slave trade. Countless people were sold as commodities and sent across the world to live out their days on plantations and in mines. In the Spanish colonies of South America in the 1600s, the indigenous peoples was dehumanised in this way, and voices of protest were rare indeed. Which makes the work of Saint Peter Claver all the more remarkable: he devoted his life entirely to the physical and spiritual welfare of slaves.

Peter Claver was born to a wealthy family in Verdu, Spain, in 1581. He studied at the University of Barcelona and after graduating decided to enter the Society of Jesus. At the age of twenty, he joined the Jesuit noviciate at Tarragona. While studying philosophy at Majorca, Claver was advised by Alphonsus Rodriguez to travel as a missionary to the Spanish colonies in South America.

Claver agreed and volunteered for the missions, arriving in Cartagena in 1610. Cartagena, located in modern day Colombia, was one of the major port cities of South America, and slave ships from Africa would dock there to sell their goods. These slaves were in high demand for working in the gold and silver mines there, and an estimated ten thousand slaves travelled into the port each year. When Claver arrived in Cartagena, he travelled first inland to Bogotá where he finished his studies. This achieved, he returned to Cartagena where he was ordained a priest in 1616. Then, Claver, who in the time he spent in the colony had become very aware of the plight of the slaves, set about ministering to the welfare of the hundreds of West Africans brought across the Atlantic to be put to work.

Claver was on hand from the moment the slave ships docked at the port. The slaves were kept in the hold in such horrendous conditions that an estimated one third of those who undertook the journey didn’t survive. Those who did make it arrived malnourished and terrified; Claver brought medicines and food with him when he went down into the holds of newly arrived ships and would not leave the ship until he had in some way given aid to each individual he encountered.

Father Alonso de Sandoval, five years Claver’s elder, acted as mentor to him in his efforts. Sandoval too felt strongly the need to help those who had lost their freedom and been brought across a sea against their will. While Claver looked to the needs of the newly arrived slaves, Sandoval travelled the plantations where they were put to work, converting some and pleading for better treatment of them by their owners. Claver too would journey to see those he had helped on the boats during the season when few trade ships crossed the Atlantic. As he travelled the plantations, Claver would refuse to stay with slave owners, instead spending his nights in the slave quarters.

Claver devoted decades of his life to the welfare of others, until by the end of his life he was left too ill to leave his room. For four years he was bedridden, forgotten and neglected until his death in 1654. Upon his death however he was given a public funeral and many turned out to pay their respects. Fr Peter Claver was beatified in 1850 and canonised in 1888, and was declared the patron saint of missionary work among all African peoples.

Grenfell and the Good Samaritan